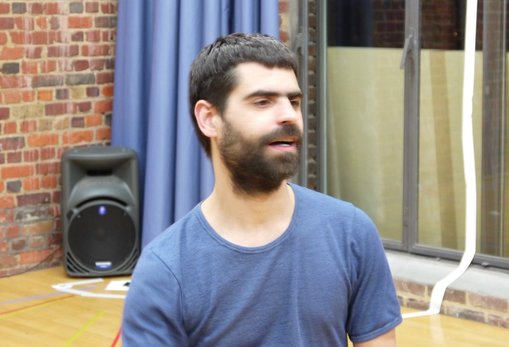 TRAJECTORY
My trajectory as an artist and Choreographer started at the Fine Arts School University Miguel Hernandez in Spain with my first video Ma vie en rose and dance piece Espaço/Corpo Corpo/Espaço. I've moved to Brussels in 2003 and started to work in collaboration with the Choreographer Sara Manente. We have created two pieces Palindrome in 2004 and Eye in the sky in 2005. At the same year together with 6 other choreographic artists  we founded the collective CABRA VZW, with the idea of facilitating the work of the artists involved. In 2006 Sara Manente proposes to the collective the project 'Instructions', I create the solo Impulse for this project. In 2009 I completed the post-master a.p.t/A.pass in Performing Arts in Antwerp at deSingel, where I presented several works around my concept The LaughingBody: Falling (video), Laughing Drawings (drawings), Laughing Walk (video), Punch-Line/Decision (video sound installation), the performance The LaughinGame, and the publication The Laughing Body. In 2010 I present the video sound installation Totem - a place of contradictions and Eskimo a piece for 6 performers. In 2012 in collaboration with Sara Manente we start the project This Place - a series of performances around ESP practices together with invited artistic couples. In collaboration with Hwang Kim and Sara Manente we present the performance X:I liked B better / Y: I'm 29 too, a piece commissioned by the Festival B:om in Seoul in 2013. In the same year together with Lilia Mestre we present Ai! a choreographic project and I create the video Rita (a relay project by Cabra vzw)  in 2014 Processionism an exhibition/cinema/performance - a collaboration with the visual artist Marcelo Mardones, and Elbow Mountain Tooth a collaboration between Cabra vzw and ETT based in Seoul. In 2016 together with Sara Manente we present two pieces Tele Visions (an experiment in telepathy with the audience) and Lava.

​As a performer I have worked for Sara Manente (Faire un Four), Kyung Ae Ro (Angle), Nada Gambier (Untamned Thinglines and Monstruos encounters of clowns), Ayelen Parolin (Troupeau) and Jordi Gali (the song of silence and you).

CREATIONS and WORKSHOPS
2017 presentation of Tele Visions and the workshop around this work at Mezzanine in Porto, Portugal.
2017 invited to be part of the Jury at at ISAC, academie des beaux arts, Brussels, Belgium.
2017 invited to be part of the Jury at APASS (advanced performance and scenography studies), Brussels, Belgium.
2016 gives the workshop Tele Visions at ISAC, academie des beaux arts, Brussels, Belgium.
2016 gives the workshop Place this at Kask conservatarium in Ghent, Belgium
2016 performer in Monstrous Encounters of clown by Nada Gambier, kunstcentrum Buda in kortrijk in Belgium, and at Barker Theater in Turku, Finland.
2016 presentation of Lava together with Sara Manente in kunstcentrum Buda (Kortrijk - Belgium)
2016 presentation of Tele Visions together with Sara Manente in kunstcentrum Buda (Kortrijk - Belgium)
2015 gives the workshop Place this together with Sara Manente at Apass (advanced performance studies), Brussels.
2015 presentation of Telepathy at Forest at the Festival Recommerce – art at the public space at Place St Dennis-Brussels and ‘Telepathy in Madrid’ at CA2M in Madrid, Spain.
2015 presentation of Processionism at the Cinema Galerie in Brussels and at StrangeLove Festival in Antwerp, Belgium.
2015 Creation and presentation of the variation This Place with the artistic couple Von Calhau at Teatro Campo Alegre, Porto – Portugal.
2015 performer in Monstrous Encounters of clowns- block2 by Nada Gambier, kaaistudio, Brussels.
2014 Presentation of This Movie with Jorge Dutor and Guillem Mont de Palol at Festival Inmediaciones (Centro Huarte), Pamplona-Spain.
2014 Elbow Mountain Tooth a CABRA VZW collaboration project with Jaime LLopis, Sara manente & Kyung Ae Ro and 6 Korean artists in Seoul presented at the SinSaJang Gallery in Seoul, South Korea. 2014 Presentation of the project ‘Processionism-an underground ceremony’ at Abbay de Forest (FCC- Forest Centre Culturel)
2014 Presentation of This Movie and the practice of Telepathy in collaboration with Jorge Dutor and Guillem Mont de Palol, in PreCosa (La Cosa en Casa) at Muelle 3 in Bilbao, Spain;
2013/14 Creation and presentation of the different variations of the project This Place with the invited ‘artistic couples’: Aimar Perez Gali and Marc Vives presented at L’Estruch (Sabadell-Barcelona-Spain), with Jorge Dutor and Guillem Mont de Palol presented at La Poderosa (Barcelona-Spain), with Lilia Mestre and Davis Freeman presented at WorkingTitle Festival in Kaaistudio (Brussels-Belgium), with Jaime Llopis, Norberto Llopis Segarra and Marcos Navarro presented at WpZimmer (Antwerp-Belgium), with Mette Edvardsen, Heiko Golzier and Philippe Beloul presented at Szenne Gallery (Brussels-Belgium), with Edurne Rubio and Claria Rubio presented at Buda (Kortrijk-Belgium) and with Jordi Gali and Vania Vaneau at Ramdam (Lyon-France)
2013/14 performer in Untamned Thingliness by Nada Gambier
2013 presentation of the video Rita at Teatro Pradillo in Madrid, as part of an invitation by Norberto Llopis
2013 Hosted Rita ( a relay project by Cabra vzw), creation of the video Rita.
2013 Creation and presentation of Ai! a choreographic project with Lilia Mestre at Beurschouwburg (Brussels) and at Monty (Antwerp)
2013 creation process of the project Processionism in collaboration with the visual artist Marcelo Mardones at Abbaye de Forest in Brussels-Belgium.
2012 Presentation of the first version of Telephaty at Plankton bar #47, BainsConnective, Brussels.
2012 First try out of This Place with the ‘artistic couple’ Kyung Ae Ro and Eon Jin in Seoul and Gwangju, South Korea.
2012, presentation of Ai! with Lilia Mestre in szenne gallery in Brussels, and In-presentable festival in Madrid, Spain.
2011, Collaboration Research project Ai! An Interjection as relational form with Lilia Mestre presente in Working Title Festival, Kaaistudio, Brussels
2011, Interpreter for Faire un Four by Sara Manente, presented in WTfestival, Beurschouwburg Brussels and MDT Stockholm.
2010, Creation of the performance Eskimo presented in Monty (Antwerpen), and Working Title platform (Brussels).
2010, Creation of Totem a place of contradictions a video/sound installation presented in Monty (Antwerp) and Bains Connective (Brussels).
​2009, Creation of the performance The LaughingGame presented in APT (Antwerp), BruxellesBravo (Brussels) and AmperDans (Antwerp)
2009, LaughingWalk video presented in APT (Antwerp) and BruxellesBravo (Brussels)
2009,Punch-Line/Decision a video/sound instalation presented in APT (Antwerp), deDonderdagen at deSingel and lesBainsConnective in the context of Humour and Art and BXL Bravo (Brussels)
2009, LaughingDrawings drawings and video presented in APT (Antwerp) and BruxellesBravo (Brussels)
2008, Falling video made in collaboration with Sara Manente, presented in Transponder Gallery in Berlin, Germany
2008, Creation of Angle by KyungAe Ro, presented in PianoFabriek, Brussels
2006, A solo for Instructions a project by Sara Manente, performed in LesBains (Brussels) and at the Monty’s (Antwerp).
2005, Eye in the sky performed in LesBains connective, Brussels. And presentation of the video in MayDay Festival, Antwerp.
2004, Palindrome performed in Les Bains connective and C.C. Jacques Franck, Brussels.
2003, Performer in The song of silence and you by Jordi Gali, presented in Brussels and Lyon.
2002, EspaçoCorpo/CorpoEspaço performed in Universidad Miguel Hernandez, Altea, Spain.
2002, Ma vie en rose video presented at the University Miguel Hernandez, Altea, Spain
2001, Actor/dancer in Imitations in spite of Limitations by Krystof Persyn, Theaterschool, Amsterdam.
Participation in Transparent Roots by Jesus Barea, SNDO, Amsterdam.
2000, Actor in collective creation A Solas con los antónimos by Metackua group, presented in Granada and Barcelona.
Performance Metackua by the group Metackua, presented in Granada.
1998 Actor in Os Anjos de Hapócrates by João Teixeira, presented at Agencia 117, Lisbon.
1997 Actor in Rupture by João Teixeira, presented for the publication of the book with the same name at Coimbra, Braga and Lisbon.