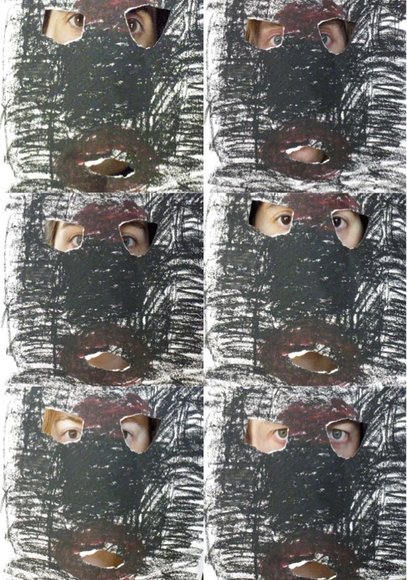 Eskimo is an insult.
Eskimo is a game of embodiment of insults. A relational event,
in which the performers are mocking themselves and the others.
A relation that generates thought and language.
An infancy state that plays within and without the law, generating a
field of possibilities.

AN INTRODUCTION
​Eskimo started from the idea of using the insults as the motor to generate a creation. Trough the embodiment of the insults, what kind of bodies would appear? What kind of relations would these bodies have? What kind of sounds, movements, and language would these bodies generate? How do we look at these things?
When the insults are towards something that we cannot reach, it becomes a field of possibilities. The insults become the carnival, the folklore, the rituals, ...The insult as a mask.
During the process, the performers where in a constant process of embodiment of insults, mainly in the form of mockery (towards oneself and the other). By playing a game of becoming through associations and recognition by watching oneself and the other in this embodiment process. What where the associations made in relation to what they where doing? What type of relations or relational events they could recognize?
Eskimo is a community event for protection, to defend their territory against bad feelings. Eskimo is a renewal process, a game of liberation. The performers move in a space of transition, a space within and without the law. Eskimo is a state of exception.

Insults is always associated to a certain perspective, a way of feeling things and most of the time appear as the result of an impotency face to a certain reality.  In the case of an artist it’s an internal battle between realism and idealism – what I do define as a laughingbattle. The insults here are part of a transitional period, related to the cycles of time, present in a space where the order is interrupted, to generate a new order, like the cyclical feast such as the carnival, rituals of fertilization and initiation.
Trough a game of a constant embodiment of the insults, 4 performers + 1 sound maker will generate a performatic event, creating a constant ‘insulting’ relation between the self and the other. A picture of an emotional state  in these days where our actual body deals with a lack of proposals, a lack of seriousness and a high sense of catastrophy.
5 insultingbodies in a game of liberation and humor, using the game and a state of infancy as a field of posibilities to generate creation, language and thought.
The game of saying things seriously by laughing.