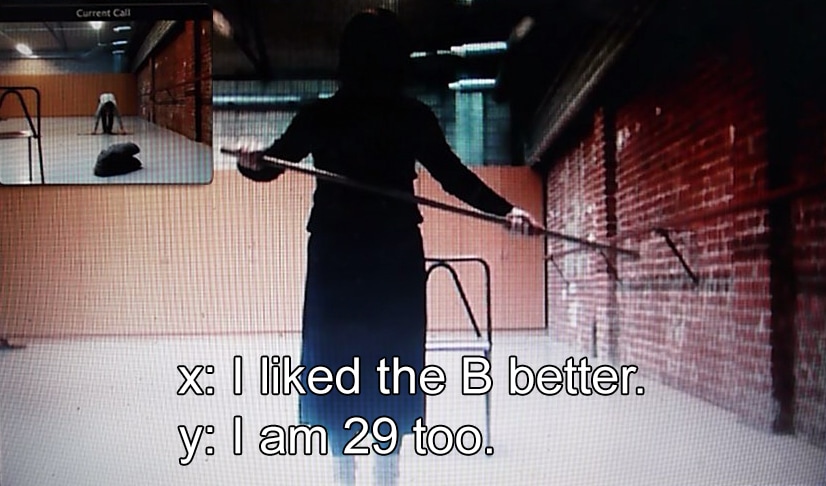 "x: I liked the B better/ y: I am 29 too" is a performative set for a close and distant connection between South and North Korea. There will be 2 different technical systems of video cameras and screens to make real time connection between N & S. The set is a channel, a mirror and at the same time a performatic obstacle for understanding. The system is transparent and pragmatic and it is the audience which create sense of what's happening by witnessing both side.
x and y will meet for the first time and telepathically create movements, have a conversation and play with objects. Assuming the roles of sender and receiver, they try to transmit information without using any of our known sensory channels or physical interaction. "x: I liked the B / y: I am 29 too" will be an design object, a scientific experience, a practical joke and a daring live performance.

Credits
A performance by Hwang Kim, Sara Manente & Marcos Simoes
"x: I liked the B better/ y: I am 29 too" is a performance commissioned in 2013 by the Bom festival in Seoul with the support of the Flemish Community and the embassy of Portugal in Seoul.

http://www.instituto-camoes.pt/sobre/comunicacao/noticias/9004-coreografo-marcos-simoes-no-festival-bom
TEXT DURING THE PERFORMANCE FOR THE AUDIENCE
This is an experiment in telepathy between two young people from South and North Korea. Due to the current tension between the two parts, we need to place the location 46.3 kilometers(28.8 miles)away from the original plan. We contacted a smuggler to find two North Koreans to be part of our performance. We have met and worked with them without knowing where they really belong to.
For the safety of the performers we are obliged to strictly forbid any recording of images and sound during the show. We are the only ones witnessing this communication.
The show is divided in four parts of 15 minutes.
Please use your earplug in the second part.

PART 1
x and y are in two different places, but they share 3 objects and 3 movements.
They are testing their telepathic abilities by trying to do the same.
x and y can hear but can not see each other.

PART 2
x and y have a conversation.
x and y can see but can not hear each other.

PART 3
x the sender will mentally transmit the message to y the receiver.
The message is thought and written down live.
The receiver gets the message through telepathy and performs it.