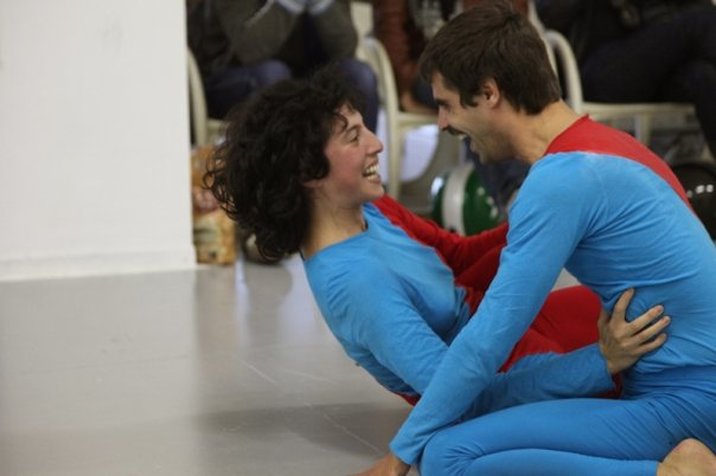 The LaughinGame is a relational game, where the laughter is seen as a sensation and a pure physical experience. When the laughter is the motor of communication, feeling, seeing, expressing and understanding. What kind of relation do these laughing Bodies generate?
It quickly becomes clear that a body, completely absorbed by laughter transforms into an uncontrollable mass. It no longer has a single reference point and loses its contours.
The LaughinGame is a liberation game where the performers act as a mirror of each other and provoke mutual laughter. They infect each other and slide deeper and deeper into an uncontrollable state.
What if we try to find sense in an apparently non-sense place?
The Laughing Body as a significant contemporary body strategy in times of confusion and dispersion of meaning.


DESCRIPTION
The LaughinGame is a performance event with 2 performers (Marcos Simoes and Varinia Canto Vila) and 1 musician (Christophe Albertijn), with a duration that is normally of 1h15m but that can be adjusted concerning the context (example 60 minutes). The time of the performance is decided by an alarm clock.
The public is placed all around the event, with this disposition there is not a frontal relation common to the Theater space and a horizontal relation with the public is established. Normally the public is free to enter and to leave the performance whenever they feel like.
The music is a continuous landscape of laughter sounds composed on live with previous rehearsals sounds, TV shows and the eco of the laughter produced during the performance.
The Game is used as a strategy to avoid representation.


TEXT BY CONSTANZE FOR LAUGHINGAME
Two foolish bodies fill an empty space laughing. They establish in a mode of constant eruption by forcing themselves again and again into the mere gesture of laughter until the moment when they start feeling home in it. When all of a sudden they can’t help bursting out into a laughter so strong and suggestive that it immediately spreads allover. It is a laughter at the ridiculousness of their own efforts.

Apart from its usual connotation as emotional expression or spontaneous reaction Marcos Simoes explores the laughing body as a body relating to itself in a powerful circulation between identification and alienation, openness and contraction, awareness and self-referentiality. In his duet with Varinia Canto Vila the dancers form two complementary parts of an organic whole. Two contemporary jokers, whose outfits remotely reminds of some haunted phantoms of (modern) dance history, invade laughter as a place to stay. They activate it as auto-poetic machinery, as a space of capitulation and potential at the very same time, as dead end and opening even though or right because it is the space, where the stable order of representation collapses over an unbridgeable void into a physical state of emergency. Laughingame takes the energy of the laughing body seriously and proposes a challenge: What if we try to settle in the voids? What if communication is started from where meaning ends and bodies shake their images in a constant, joyful tremor?