LAUGHINGWALK 2008/2009
video
Laughingwalk was a proposition for Istanbul. Starting out from an intimate and closed situation, I made this proposition for a public space.The proposition consists of a walk of more or less 2 hours. Walking and laughing in the streets of Istanbul.
This proposition came to my mind for several different reasons. But the one that was crucial to me, was the fact that I make this walk in a different culture, with different religious and political references, and a completely different language than mine.
The proposition relies on the question: how do I laugh in a public space like Istanbul’s? What kind of relations can be created?
And how can these relations through laughter create a certain path? Where does the laughter bring me? Which kind of contacts, meetings will occur, if they occur at all?
If the laughter can be a tool for communication, in which way can that be? (The fact that the language, social and cultural barriers are broken up through laughter?). How does the body act, with the laughter as a motor to move through the city? The laughter as the energy, the reason for taking up the act of walking.
The body is in constant activity through laughter. I’m not interested in a certain statement, but in a certain way of acting, in doing. The body in action states at the same time that the environment affects and provokes this constant activity. 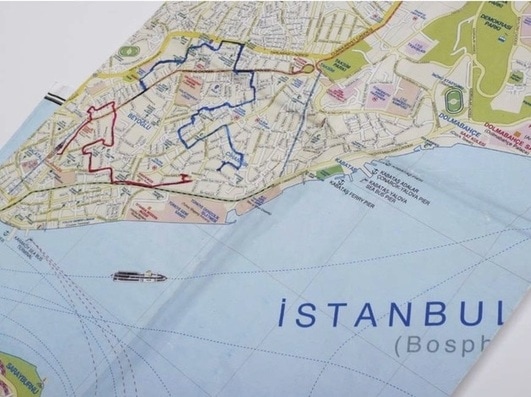